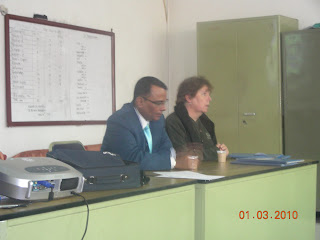 When last we left off, lo these many non-blogging days ago, Jeny and I had made the decision that we would try to return to Nepal's Cancer Hospital so I could give a lecture and perhaps a hand.

Going back to the Cancer Hospital in Bharatpur from Pokhara was actually a fairly ambitious undertaking.   I wasn't particularly worried about the “content;” I had brought along a thumb drive for use in blogging that miraculously contained a Powerpoint presentation I had given  a few months before.  It was called  “Breast Cancer Update for the General Surgeon” and I hoped that with a little tweaking I could make the talk applicable to oncologists in Nepal.  So content wasn't an issue, but the logistics were a bit daunting.

In the best of all possible worlds getting to Bharatpur would mean at least a four-hour drive each way, several hours at the hospital, and buy-in from the kids that it would be okay to leave them alone with Jeny's parents for a long day.  Fortunately the kids readily agreed (very readily!) and Jeny's family  kindly made arrangements for us to be driven to Bharaptur by a young man from Pokhara.  Our driver's name was Manipush,.  He was only 22 but had been driving his own personal teeney Suzuki taxi ever since he managed to buy it three years previously.  A very hard-working and heroic driver was our Manipush. 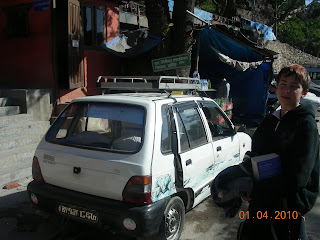 This is how I figured it:  we'd drive in pre-dawn cozy-taxi warmth for an hour or two, and then at dawn we'd see a gorgeous Himalayan sunrise, grab a quick warm-up with a tea-and-toast breakfast at the side of the road, and then set off on the last couple of hours of straight, mostly paved roads, where I would be able to sit in the back seat, review my talk, and maybe even start up on my latest vacation novel. 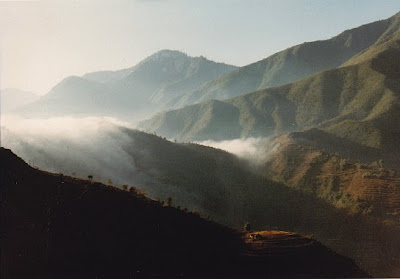 As was nearly always true in our travels, my American vision differed from considerably from Nepalese reality.  The taxi was unheated and the windows leaked and in a singularly stupid move I hadn't brought a coat (in my defense it was the only time I was unprepared for cold weather).  I was wearing a sweater and fleece but the cold was piercing.  The Pokhara Valley was socked in a dense, above-ground wet “tule fog,” and visibility was often less than twenty feet.

I sat in the back of the taxi for hours, shivering and unable to see a thing except for the occasional terrifying looming-out-of-the-fog-speed-demon-Indian lorie bearing down straight for us.  Or, if that wasn't scary enough, sometimes we had a guaranteed-to-be-maximally-combustible oil truck bearing down on us. 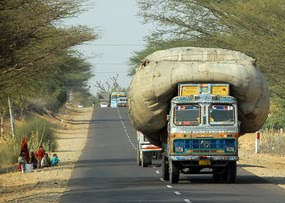 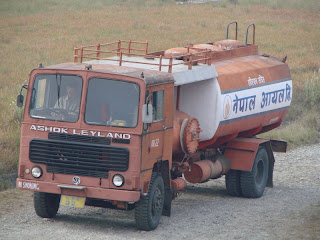 I can't begin to describe how scary it can be to drive in Nepal.  This link may give the tiniest of ideas.  Or for a longer, even more vertiginous view, try this link.  (Do not, however, watch this if you ever have any intention of going anywhere in Nepal on a bus.)  Or, if you'd like to see even more, try this not-vetted-by-the-nepali-tourism-board Lonely Planet video

The list of terror-inducing road realities is endless: First off, you drive on the left, so everything is turned around for a long while.  But on top of that, road engineering is primitive at best.  The very best roads are barely two lanes.  There are no breakdown lanes.  There is no room to pass, but everybody passes anyways, giving small toots of the horn to remind everybody a) I'm passing and b) we all, every one of us,  want to pass you and have both of us come out of this alive.

The army was everywhere during our trip.  Often only feet away from us. Often they're friendly.  Not always. 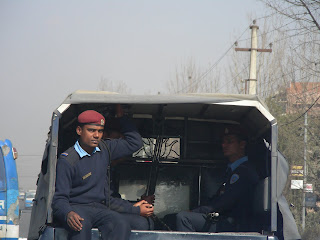 And then there are the pedestrians.  The vast majority of people in Nepal have no car, no motorbike, no bicycle; they walk.  And a lot of the times they're walking right by the side of the road.  Or the highway.  Or in the middle of the lane of the highway. 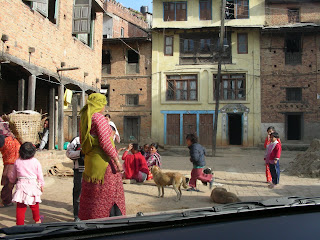 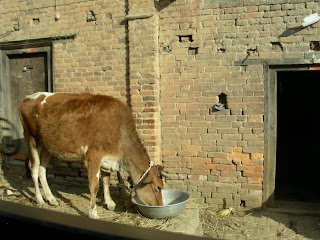 And most terrifyingly of all, you have four year old girls darting out into the street (in our first heart-stopping encounter with a four-year-old in the street we missed her by less than a foot). 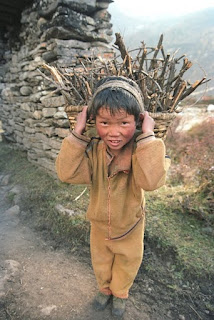 And there is no infrastructure on the roads.  There's no speed limits.  There's no street signs, no warning signs, no "curve ahead" or "steep incline ahead" signs.  You just go around the corner and look down at a thousand feet of free fall.  And maybe an oncoming bus.  Surprise! 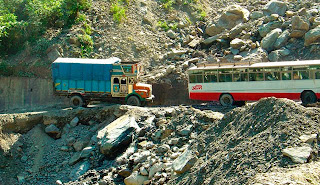 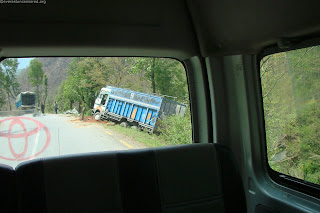 Needless to say, I didn't sleep.  And I was so cold, so unbelievably cold.  I took everything I happened to have in the previous day's backpack to lay on my shivering little self.  I found two “yak wool” scarves I had bought as presents; instead of going to their intended recipients I ended up wearing them on  my legs.  I had brought a Size Very Small “Harvard Med School” hoodie to give to the department director; it was too small to wear but perfect for laying on my back.  I had a tiny hat which covered my neck if not head.

It was gray, cold, bleak; every once in a while we could see kitchen stove fires in roadside shacks or peasants out gathering firewood or carrying produce on their backs en route to market.  Animals ambled by;  cows, goats, sheep.  We hit checkpoints and passed microbuses laboring up the hills.  We lost so much time in the fog we felt we couldn't stop  for breakfast, so I chewed on the butt of a granola bar I found at the very bottom of the backpack and lay there in misery while the kilometers slowly ticked by.

We finally arrived in Bharatpur,  home to a small medical college and the Cancer Center, but still, not exactly the center of civilization. 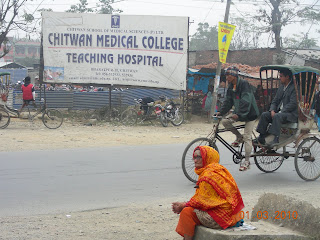 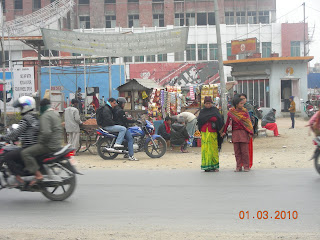 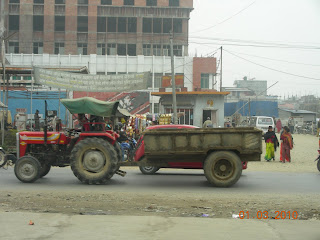 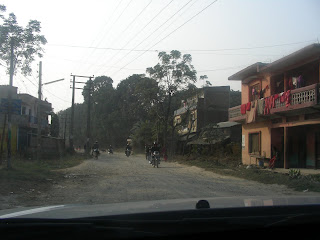 When we finally arrived at the Cancer Hospital, we were again the only car in the parking lot, and I did jumping jacks and yoga moves waiting for our escort.  Fuzzy-headed and frozen we made our way to a small auditorium where I became instantly awake upon seeing the now famous sign and a room full of shiny expectant faces: 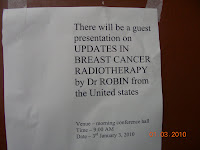 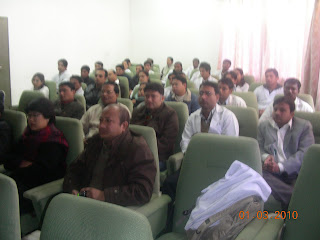