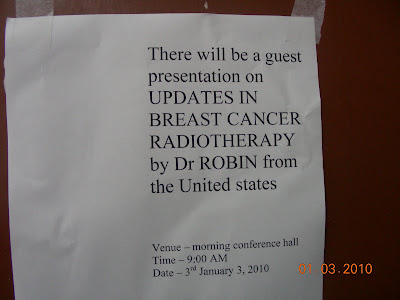 After many glitches in the plans to go back to Chitwan, several fizzled-out strike threats, several sets of arrangements for the kids to be tended while I was gone for a day, several back-and-forth emails around several periods when there was no electricity, finally, finally, finally with the incredible help and determination of Jeny, I was able to promise one of the Radiation Oncology doctors that we would be returning to his hospital a few days later and that I could help in the clinic for a morning and give a lecture.

So that is how it came to pass that at 8:45 am on Sunday, January 3, 2010 -- after a four hour frozen ride in the back of a taxi -- we walked into the lecture hall at the BP Koirala Memoria Cancer Center in Bharatpur, Nepal, and found this sign on the front door.

Next post:  The "talk" and the ad hoc visiting professorship