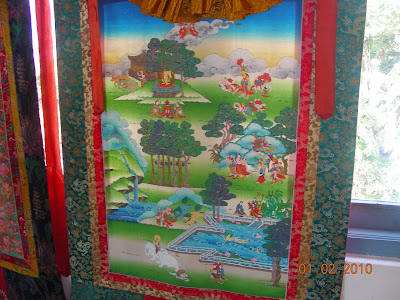 One day we mentioned in passing to Jeny's dad Rajendra that we might be interested in obtaining a Thangka painting (and many thanks to Ms Judy Love our neighbor who taught us about them).

Thangka paintings are a Nepalese/Tibetan/Buddhist art form that developed over the centuries: Buddhist monasteries had always had detailed religious paintings on their walls – as decoration, as aids to meditation, as teaching tools – but portablity became an issue for monks who traveled the countryside teaching people about Buddhism. Gradually monks began drawing on sheets of cotton which could be rolled up and which could tolerate extremes in weather, a most important feature in Nepal!

The moment the words were out of my mouth, Rajendra eyes lit up. He instantly drove us to a part of Pokhara we hadn't seen before and pulled up in front of a locked-up seemingly deserted building. He banged on the door and yelled up some stairs and an old tuberculer-appearing man came out front, listened for a minute, and then called for a woman about my age in a yellow salwar-kamis. She smiled and gestured us forward.

She took us around the back of the building, down a narrow hallway with flipflops in front of a line of tiny doorways, and up some cement stairs into an old building that looked like a small square old warehouse – corrugated roof with holes in the walls, lots of high windows and lots of light, with a small kitchen attached.

(It turned out the kitchen opened to the whole courtyard and a wide variety of people were constantly coming and going, tasting the food in the pots, taking plates of their own food outside, stirring rice etc; another example of the bewildering interrelatedness of people in Nepal and the matter-of-fact lack of privacy.) 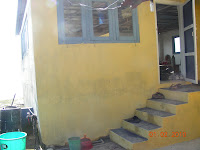 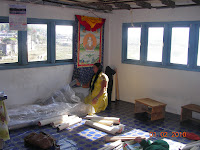 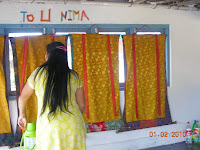 The woman in yellow turned out to be a premiere local Thangka artist. There were four completed paintings on the wall (painted in Pokhara, “framed” in silk fabric in Kathmandu, costing 25-40,000 rupees or $350-$500). But to our delight she had dozens of rolls of partially completed, finished, and consignment paintings and she sat on the floor and began pulling them out for us to look at.

We learned that there are different types of Thanga paintings: mandalas, the story of Buddha's life, wheels of life showing the six parts of a person's life with a scary-looking god holding the wheel in his teeth; etc etc; and she had painted all of them, and had several ethnic types of paintings: Japanese, Tibeten, and Russian, all of which had been commissioned for monasteries in those countries. 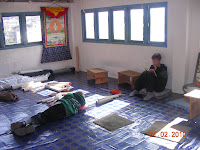 We sat on the slightly dusty linoleum floor with the sun pouring in and the probably tubercular old man sitting in the corner, and she shared her work. People came and went without announcement or introduction and food simmered on a burner. We asked a million questions about the stories shown in the paintings and after a bit she said, “I don't know all the details, let me get somebody who does.” She said something to somebody and we continued to talk and walk around looking at finished paintings for quite some time while Kenzie and Cooper sat patiently in the sunlight reading their books. 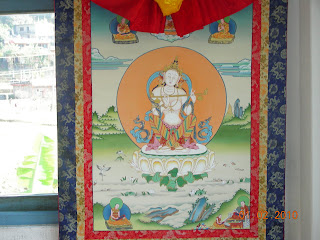 Suddenly a Buddhist monk appeared, with no explanation or preamble; he just walked over to one of the paintings and started explaining, in minute detail, what each segment of each painting represented. We gradually learned that he had been a Buddhist monk for 18 years and was now a teacher. His explanations were apparently multi-layered and “intense” according to Jeny, who was trying to translate. We would ask a question, he would answer in Nepalese for two or three minutes straight, and then Jeny would say, “Ummmm, this picture is a manifestation of Buddha's different manifestations.” 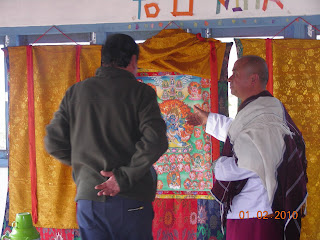 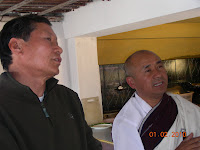 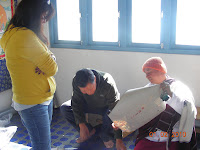 Tea was brought in (tea is always brought in) and all told he spent about an hour with us. Then he said, “Want to see the biggest one?” and before he had even finished saying the words three more people magically showed up, and the artist began pulling an enormous – maybe 15 feet long – tube out from all these other tubes stacked up on top of each other on one side of the room. Before we quite realized what was happening, the floor had been cleared and they began to unfurl it on the floor. It was indeed huge – perhaps 15 by 18 feet – an enormous and intricate version of Buddha's life; it took over eighteen months to complete. All the people who had appeared to help uncurl it stayed to look at it with us, reviewing all the details and marveling at the artistry, a magical moment. 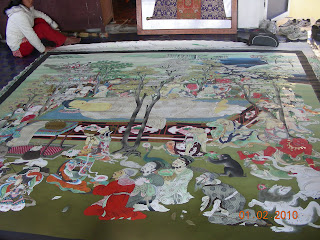 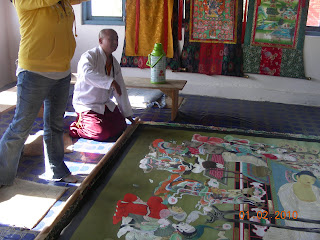 And then to "commerce;" they rolled the big commissioned painting back up, we asked prices about some small pieces, were told a set price and told why they should charge us more (and why they would charge anybody else more) and the transaction was finalized.

Except that nothing in Nepal ever seems to happen as expected; after watching us give the money to the artist, the monk asked if we wanted to see his room. Curious, we walked around the corner to an unmarked door in the hallway that reminded me of a 50s apartment building. We slipped off our shoes, stepped over the threshold, and there was a full-on monastery – six or eight statues of Buddha, hanging drums, incense and gold everywhere, and over in the corner a tiny bed. Quite a “room”! 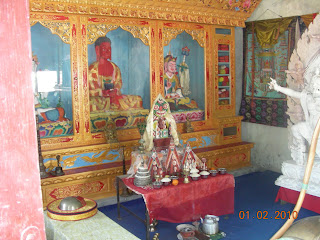 In the end, I came to the conclusion the lama and painter were part of a small school, and that some of the people who wandered in and out were the lama's disciples. Or maybe there were family. Or maybe they just all lived in the same building. In Nepal, relationships are so interwoven, and so fluid (every older woman is “older sister,” every young man is “little brother”) that anything is possible. ;-)


A few days later we hired a guide at Bhaktapur Square and he took us to a “Thankgha Painting School.” How realistic this was and how much it was thrown together for the tourists is impossible to know, but these pictures show how the artists work, at least on the mandalas shown here: first coming up with an idea (through meditation etc), then pencilling it in on cotton fabric, then painting with tiny thin spit-laden paintbrushes, then adding detail, and then, if money is available, adding small strokes of real gold. The detail is absolutely staggering, the exquisite brushwork inspiring, and the stories endless, truly endless: we were told that there are over 23 million deities in Buddhism (or there are none, depending on one's point of view), so they will never ever run out of material. 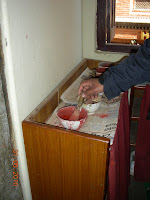 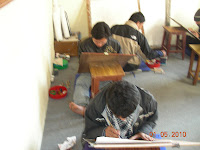 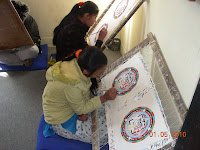 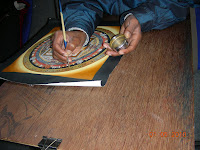 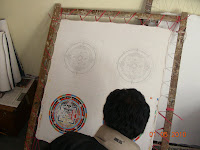