The most ghastly thing I saw in Nepal

Seen below is a consent form for a patient receiving treatment for cervical cancer. 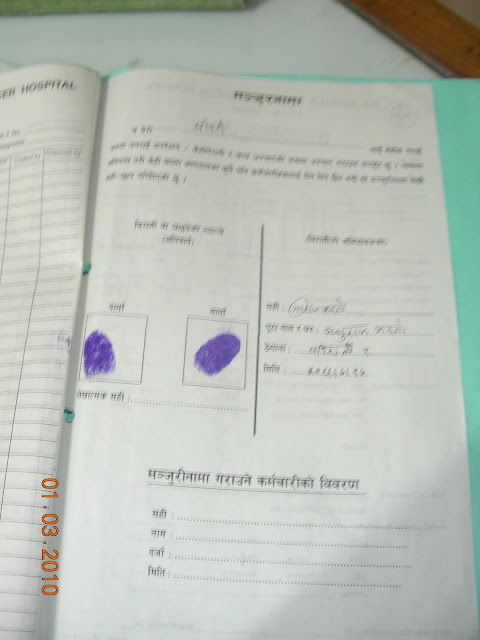 The document is signed with two fingerprints, indicating that the signature is by someone who is illiterate.

Why was this a ghastly document to see?

It was a grim reminder of how common cervical cancer is in "third world" countries, including Nepal, where the incidence is estimated to be 19 cases per 100,000 adult women (vs 8 in the US).
Plus when Nepalese women get cervical cancer, they are much more likely to die of it --
it's fatal more than half of the time --
and it's a terrible, terrible way to die.
(Cervical cancer is usually caused by a sexually transmitted virus.  Widespread use of PAP smears and better STD education (and hopefully the cervical cancer vaccine) has greatly decreased the incidence and death rate of cervical cancer in developed countries.)


And it's a grim reminder of the horrifying illiteracy rates in Nepal:  the overall illiteracy rate in Nepal is 50%, and much higher in women --  in some studies as high as 75% (!!!).
Even most conservative sources (eg the CIA World Factbook) estimate that only 35% of Nepalese women over 15 can read and write.


But the reason that the piece of paper is truly ghastly is because the consent is given by the HUSBAND.

So here is a presumably illiterate woman, who has developed a life-threatening cancer probably as a result of an infection given to her by her husband.  And now HE has to give permission for her to get treatment for a disease that he probably gave her.